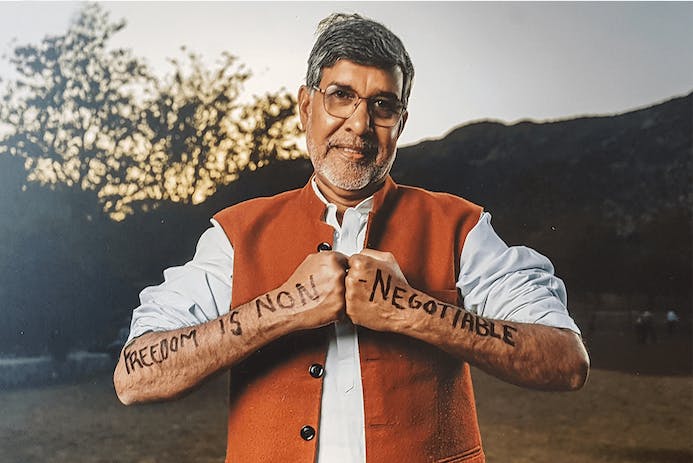 Repton School is delighted to host a unique workshop on Monday, 10th June 2019 with The Nobel Peace Prize Laureate, Mr Kailash Satyarthi who won the motivation prize for his “struggle against the suppression of children and young people and for the right of all children to education.” Below is a short brief of his work and background.

Kailash Satyarthi was born in the Vidisha district of Madhya Pradesh in India. After completing an electrical engineering degree, he worked as a teacher in the area. In 1980, he left teaching and founded the organization Bachpan Bachao Andolan, which has freed thousands of children from slave-like conditions. He has also been active in a wide range of other organizations working against child labor and for children’s rights to education. Kailash Satyarthi is married and has a son and a daughter.
Much of the world’s population, especially in poor countries, is made up of children and young people. To achieve a peaceful world, it is crucial that the rights of children and young people be respected. Following the tradition of Mahatma Gandhi, Indian activist Kailash Satyarthi has waged a peaceful struggle to stop children being exploited as labour instead of attending school. He has also contributed to the development of international conventions on the rights of children.
Mr Satyarthi is a human rights transformer who has worked tirelessly to end the exploitation of children and has been at the forefront of the global movement to end child slavery. The Satyarthi Foundation launched the 100 Million for 100 Million Campaign in 2016 to reach out to 100 million children to speak out on behalf of those who cannot. This led to the film, ‘The Price of Free’ which has won numerous awards.

Here is the link to the film.

We are incredibly proud that Mr Satyarthi is able to visit Repton owing to the passion and efforts of one of our Year 8 students, Amani Husaini. Amani was deeply affected by Mr Satyarthi’s work and subsequently invited him to the UAE to share his message with young people here. Amani is a volunteer at the Kailash Satyarthi Children’s Foundation and has facilitated this event from its inception to its reality. She will be introducing Mr Satyarthi before his workshop.